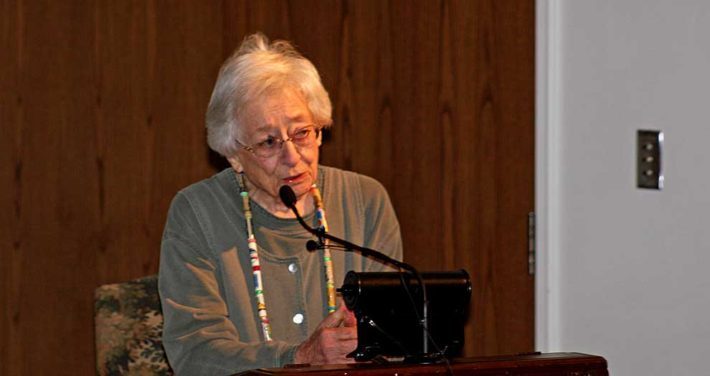 Born in 1918, Windham took an early interest in the beauty and power of the written word. At age 12, Windham penned movie reviews for her cousin’s newspaper, The Thomasville Times. After graduating from Huntingdon, she returned to the Times as a freelance writer, but was hired in 1940 as a feature writer and police reporter with The Alabama Journal—one of the first women to cover the police beat for a major daily paper in the South. She moved on to the Birmingham News in 1944, editing state news and aviation and serving as a courthouse reporter. After marrying her husband, Amasa Benjamin Windham, the couple relocated to Selma, where they raised their three children. Kathryn continued to write—freelance articles for Progressive Farmer magazine and many Alabama newspapers. For sixteen years she wrote a locally syndicated newspaper column, “Around Our House.”

Amasa died suddenly in 1956, and Kathryn joined the writing staff of the Selma Times Journal, where she remained for 17 years.

Windham is best known as a storyteller and photographer, publishing more than 20 books during her career. Her most famous book, 13 Alabama Ghosts and Jeffrey, which she wrote with her Huntingdon English professor, Margaret Gillis Figh, contains the story of Huntingdon’s most famous ghost, “The Red Lady.” As a storyteller, she was frequently featured on NPR and Alabama Public Radio. She died June 12, 2011, and was inducted into the Alabama Women’s Hall of Fame at Judson College in March 2015.

Ed Williams, who nominated her for the Alabama Newspaper Hall of Fame, wrote, “Whether telling stories, commenting on Southern customs, passing along cherished recipes, or capturing Alabama life in photographs, her work had a unity that centered on her powers of observation and memory and her love for the South, its people, and its lifeways.”

Huntingdon College, grounded in the Judeo-Christian tradition of the United Methodist Church, is committed to nurturing growth in faith, wisdom, and service and to graduating individuals prepared to succeed in a rapidly changing world. Founded in 1854, Huntingdon is a coeducational liberal arts college recognized as a top 10 best buy among regional colleges and in the top tier of regional colleges by U.S. News and World Report; among the top tier of regional colleges by the Princeton Review; among “Colleges that Contribute to the Public Good,” by Washington Monthly; and on the President’s Higher Education Community Service Honor Roll. The Huntingdon campus, a Tree Campus USA, is listed on the National Register of Historic Places.

Huntingdon College is committed to a policy against legally impermissible, arbitrary, or unreasonable discriminatory practices. Therefore, the College, in accordance with applicable federal and state law and stated College policy, prohibits discrimination on the basis of actual or perceived race, color, ethnicity, gender, gender identity, sexual orientation, disability, religion, age and/or national origin. Inquiries and or complaints may be addressed to: