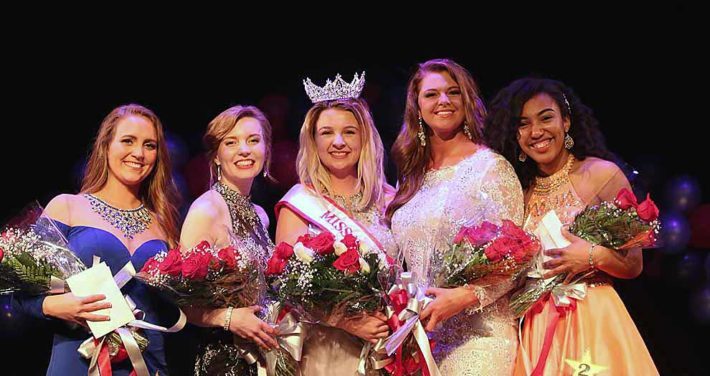 Montgomery, Ala.—Fifteen Huntingdon College women competed for the title of Miss Huntingdon, Saturday, March 17. The annual pageant, which occurred after judges completed interviews with the candidates, allowed judges to observe for self expression, talent, poise, platform, and the answer to a question posed on-stage. At the pageant’s conclusion, six prizes were awarded. Miss Philanthropic, voted by her peers, and Miss Congeniality, voted by her sister contestants, were awarded to Autumn Allday, a sophomore Exercise Science major from Valley Grande, Alabama. A new Crowd Favorite Award, voted upon via text by pageant viewers, was presented to Sidney Ison, a sophomore Biochemistry major from Huntsville, Alabama. Taylor Young, a junior majoring in Business Administration and Art from Wetumpka, Alabama, was awarded Second Runner-Up. Lindsey Hicks, of Tallassee, Alabama, a junior majoring in Elementary Education/Collaborative Special Education, was honored as First Runner-Up. Miss Huntingdon 2018 is Cassidy Oswald, a sophomore majoring in Religion and Psychology from Troy, Alabama. The awards were presented by Miss Huntingdon 2017, Josie Waddell.

Oswald, the daughter of Jason and Carla Oswald of Troy, Alabama, was sponsored by the Voice of Justice Club for the pageant. She is a member of Campus Ministries, Voice of Justice, and Chi Omega women’s fraternity. Her talent was an a cappella vocal performance. Oswald’s platform is the American Foundation for Suicide Prevention.

Hicks, the daughter of Robert and Amelia Hicks of Tallassee, Alabama, is a member of the Marching Scarlet and Grey, which sponsored her for the pageant. She also plays french horn for the Huntingdon Winds and trumpet for the BallHawks Pep Band. She is a member of Diamond Dolls, Campus Ministries, the Women’s Center, and Chi Omega women’s fraternity, for which she serves as community service and philanthropy director. Her talent was a french horn medley.

Young, the daughter of Dan and Melanie Young, serves as a Hawkette for the Marching Scarlet and Grey. She is a member of the Business Club, the Accounting Club, the Commuter Student Association, and Phi Mu women’s fraternity. She was sponsored by the Business Club for the pageant. Her talent was a baton routine.

Ison has served in many campus organizations and leadership roles, including the Pre-Health Club, the Collegiate Exchange Club, the Student Athletic Advisory Committee, Campus Ministries, the Student Government Association, Student Recruiters, Hawk Recruiters, Orientation Leadership Team, Huntingdon Leadership Academy mentor, a Resident Assistant, and a member of the women’s basketball team and the Honors Program. She serves as activities director for Chi Omega women’s fraternity. Her talent was vocal performance. Ison was sponsored by the Student Alumni Association. She is the daughter of Latarsha and Larkin Ison.

Allday, sponsored by the cross country team, is also a member of the Student Government Association, Student Recruiters, the Campus Activities Board, Rotaract Club, and serves as alumni relations chair for Alpha Omicron Pi women’s fraternity. The daughter of Michelle Johnson, her talent was vocal performance.

Ten other Huntingdon women participated in the competition. They were:

The pageant judges were Haley Ates Hudson, of Dothan, Alabama; Lizzy Pierce, of Montgomery; and Ashley Tarrant, of Birmingham.

Huntingdon College, grounded in the Judeo-Christian tradition of the United Methodist Church, is committed to nurturing growth in faith, wisdom, and service and to graduating individuals prepared to succeed in a rapidly changing world. Founded in 1854, Huntingdon is a coeducational liberal arts college recognized as a top 10 best buy among regional colleges and in the top tier of regional colleges by U.S. News and World Report; among the top tier of regional colleges by the Princeton Review; among “Colleges that Contribute to the Public Good,” by Washington Monthly; and on the President’s Higher Education Community Service Honor Roll. The Huntingdon campus, a Tree Campus USA, is listed on the National Register of Historic Places.

Huntingdon College is committed to a policy against legally impermissible, arbitrary, or unreasonable discriminatory practices. Therefore, the College, in accordance with applicable federal and state law and stated College policy, prohibits discrimination on the basis of actual or perceived race, color, ethnicity, gender, gender identity, sexual orientation, disability, religion, age and/or national origin. Inquiries and or complaints may be addressed to: