Montgomery, Ala.—Huntingdon College honored a staff member and a member of the board of trustees with the Mary Mildred Sullivan Award during Homecoming festivities, October 28. The Mary Mildred Sullivan Award is given annually to a non-student member of the Huntingdon community whose benevolence, values, and character, among other traits, set an example and reflect the values of faith, wisdom, and service for which Huntingdon College is known. The award was given to Charlie Goodyear, assistant athletic director for strength and conditioning, and to alumna Beverly Gordy McKinney, Class of 1970, a Huntingdon trustee.

Coach Charlie Goodyear joined the Huntingdon football coaching staff in 2004 and has consistently developed athletes and teams who perform at a high level. He created and has overseen Huntingdon’s strength and conditioning program since its inception. The program encompasses all aspects of strength and conditioning for the Huntingdon Hawks’ 21 athletic teams, including more than 500 student-athletes and two training facilities. He has produced 43 National Strength and Conditioning All-Americans since 2011. Coach Goodyear holds numerous specialty certifications, including as a CrossFit and kettlebell instructor and in Olympic lifting, mobility, and powerlifting. He is a consultant for regional athletic programs and for Special Forces units within SOCOM. He authored the Air Force Combatives Program Combat Fitness Module and is an AFCP master instructor and course director. He is also a licensed mixed martial arts and boxing trainer with the Alabama Athletic Commission. He and his wife, Kyanna, have four children.

“While hundreds of Huntingdon student-athletes have been transformed through his strength and conditioning program, he has also advanced the spiritual health of an entire generation of students,” said Dr. Anthony Leigh, senior vice president for student and institutional development and dean of students, upon presenting the award. “He is a character-builder and an expert in his field. He displays a devotion to his family and to his students, for whom he is a father figure for many. He is loved and respected and a man of principle and integrity.”

Beverly McKinney co-chaired the Inauguration Committee for Huntingdon President J. Cameron West and was a member of the College’s Campaign for Cloverdale Committee. She and her family invest generously in the College through their support of the Huntingdon Fund, capital projects, and the Reese and Beverly McKinney Endowed Scholarship. Active in her church and in the community, she has served on the Cystic Fibrosis Board, the Alabama Cancer Society, the Landmarks Foundation, the YMCA Foundation Board, the YMCA Jimmy Hitchcock Committee, the Cloverdale Playhouse organizing committee, and the Montgomery County Republican Executive Committee, among other organizations. She is a member of Trinity Presbyterian Church, where she has served as president of Women in the Church, director of the Missions Committee, instructor for Sunday school, leader of youth mission trips, participant in Vacation Bible School, and as a member of the Chancel Committee. She and her husband, the Honorable Reese McKinney Jr., Huntingdon Class of 1972, have three daughters and ten grandchildren.

“Beverly is a pillar of Huntingdon loyalty and her life of service to our community, to her church, to her family, and to our college is exemplary,” said Dr. Leigh. “She has a brilliant mind, an impeccable work ethic, a servant spirit, an unwavering devotion to her faith and her family, and a personality that radiates goodness, charm, and the highest ideals of her Christian faith. Huntingdon is very blessed to call her an alumna of the college, a member of our board of trustees, and one of the greatest ambassadors Huntingdon has in our neighborhood.”

The Mary Mildred Sullivan Award is administered by the Algernon Sydney Sullivan Foundation and is bestowed by colleges and universities that are approved by the foundation. 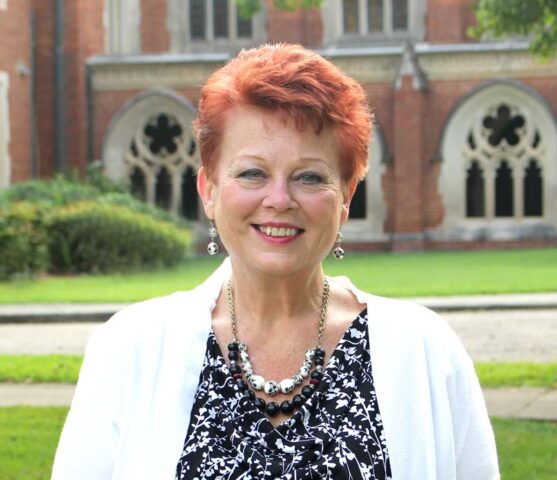