“Beyond Mountains There Are Mountains” 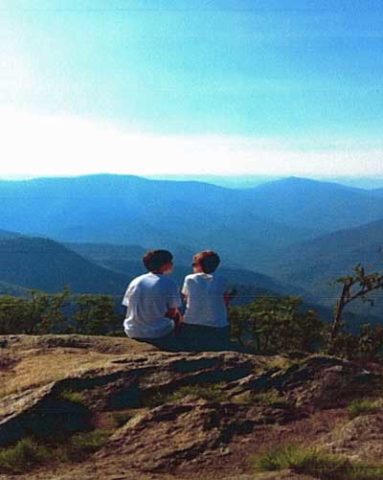 “How do you decide what to talk about”?

Two years ago, in August, 2012, I was watching the Summer Olympic Games televised from London. I was amazed at the exploits of the world’s fastest human, Usain Bolt of Jamaica. Mr. Bolt had just won a gold medal and was being interviewed, when all of a sudden he stopped the reporter in mid-sentence, turned toward the podium where medals were being awarded for a different event, and stood respectfully while the Star Spangled Banner played. The television reporter was left holding her microphone, speechless. When the Star Spangled Banner finished playing, Mr. Bolt turned back around and resumed the interview.

It was an incredible moment in which an athlete known for his self-confidence (some would say cockiness), and known for his love of country, reminded us all of the Olympic spirit. It’s a spirit, as you know, that unites both individual athletes from different nations and the various nations themselves in a time of peace and goodwill through athletic competition, however brief that moment may be. How fitting, I thought in summer 2012, to connect Usain Bolt’s expression of respect for another athlete and another nation with the spirit of Division III athletics at Huntingdon. The Olympic spirit… the Division III spirit. And how fitting it was two years ago at Convocation to lift up Usain Bolt as an example for all students. You bring your own individual strengths and identities to campus, to be sure, whether you are an athlete or someone who spends all his/all her time in the library and never sees the sun. Whoever you are — you are here, at this college, to form a community of respect for each other and to learn how to live with people different than you.

That’s what I talked about two years ago, connecting the Olympics and Usain Bolt with life at Huntingdon.

Nine years ago, as the semester began, I looked around the world I was living in — nearby -­ and I saw something that really bugged me. Really bugged me. Everywhere I went on campus, I saw running shorts, T-shirts, hats and visors emblazoned in orange and blue, crimson and white, with “A’s” and the “A Words.” Almost no scarlet and grey and white, almost no “H’s” and the “H Word,” to be found anywhere. That really bugged me. And I asked myself: “How can we ever build up this College and help our students become loyal alumni of the school that is giving them their start in the world if they are walking billboards for other schools? What can we do to help our students take pride in their own identity? How to get our students excited about being Huntingdon students? How to get our students fired up about living into a motto that is distinctive among all the colleges and universities in Alabama: ‘Enter to Grow in Wisdom; Go Forth to Apply Wisdom in Service’ ? How to do all that?”

So I gave a Presidential Convocation speech in 2005 that featured a Top Ten List about what makes Huntingdon a great college. #1 on The List: Our students, you, are special; our students, you, are like almost none of your friends who had to settle for going to college where almost everyone else was going. Those other schools are great, each in their own way, and many of their graduates have achieved greatness, each in their own way. We can, and do, respect that greatness. But our students, you, can stand out, be noticed, develop a unique life of your own. You don’t have to wear an “A” hat. Or another “A” hat. You get to wear the “H” hat!

And you know what? That speech worked. Huntingdon, your alma mater, is the fastest growing four-year college in the Deep South and the12th fastest growing four-year college in the country. Can I get a “Hawk ‘Em!”? Can I get a louder “Hawk ‘Em!”? How would we have ever achieved this distinction if we had kept on walking around every day as billboards for someone else’s school? You are benefitting from a unique education, a unique college experience. So today, when you are walking around campus, take a look. No “A’s”…or other “A’s.” And for that matter, Dean Stubbs is never seen in a Sewanee hat. Vice President Leigh is never seen in a Wofford hat. Professor McMichael is never seen in a Duke hat. We wear the “H” hat! WE ARE HUNTINGDON! WE ARE FAMILY!

Now we come to September, 2014. What to say today, in this Presidential Convocation speech? I looked around this summer, and what did I see? War between Russia and Ukraine. Attacks by the radical Islamic state against people of other faiths, in an attempt to exterminate them. The sad historic shame of America, division between white and black, continuing to play itself out -­ this time in Ferguson, Missouri. How to connect all of that reality with what is going on in your lives — and give you an encouraging message of hope at the same time — as you begin your college year?

I decided to look around again at a more nearby world — this time, the world of my own family, where my son William graduated high school in May and went off to begin life at a small four­ year college out-of-state last week. A college much like Huntingdon. In fact, my son will sit in an auditorium much like this chapel tomorrow at 11:00, listening to his president. Maybe, I thought to myself, I can find a hopeful message if I stop and look at what is going on in my 18 year old son’s life…and in the lives of all you 18 year olds who have just graduated high school and started college.

I spent weeks trying to figure out how to connect all those dots. Then one night, sitting upstairs in my house letting my mind wander, I looked up and found myself staring straight at a picture I

had stared at 100 times. This picture of my son, William, and my wife, Elizabeth (who is here today), sitting on top of a mountain they had just climbed on the Blue Ridge Parkway in Western North Carolina. And I knew in a flash what to talk about with you today in the rest of this speech.

Respecting and standing beside another, in their differences, even as he celebrates who he is…so that a pattern others made may not prevail in the world.

This is what the world is trying to be, as surely in your life as it is in the life of Usain Bolt. It’s your job during your years at Huntingdon to look and listen for the times, and places, and ways your world can be like this. It’s your job at Huntingdon to begin thinking about how to design your life so that the world can be like this…now…and during all the years ahead that rise in front of you like mountains. Beyond this rock, beyond this mountain, there are other mountains.
What I want you to get from college and take from college is a resolve, an attitude that says: “I have climbed this mountain to be here awhile; to learn; to connect my mind and heart with what the world is trying to be; to look out and see what other mountains are there waiting for me to climb, what other mountains are there waiting to tell me what the world is trying to be.” That’s your job as a Huntingdon student.

I raise my eyes toward the mountains. Where will my help come from?
My help comes from the Lord, the maker of heaven and earth. God won’t let your foot slip.
Your protector won’t fall asleep on the job. The Lord will protect you on your journeys… from now until forever from now.
(Psalm 121.1-3,8)

You are not on this journey alone.

Go climb those mountains. Keep searching for what God’s world is trying to be. And then tell your life — mountains beyond mountains, mountain after mountain you will climb — what you intend to do with it.

Thank you for listening to me. And let all the people say: “Hawk ‘Em!”